Fight against a stink bug invasion with science! And cyborgs! And bravery! Or cowardice - it's your choice, really, in this choose-your-own-adventure text game.

Btw, if you don't know what stink bugs are... I'm jealous lol.

(Experimental game done in a week)

i forgot to comment !!!! learning about stink bugs and insect science made it genuinely so fun & i really like how replayable it is

Lovely game!! Far more entertaining than taking a shower. I like it!

AAAAH I CAN'T WIN! I tried everything I could! I learned too much about stink bugs! Can anyone tell me what to do? I know cilantro and trans-2-octenal for bait, bush cricket with chewing mouth, and my poor little cutie keeps f***ing dying!

instead of using a bush cricket try using an asian wasp, they're the most effective against stink bugs:))

Thanks for the advice, I retried it and it worked so well!

I never thought stink bugs could be so fascinating. I learned so much and still had fun, great game!

I got Quite Plausibly The Best Ending! :D

I feel too attached to the first wasp. I got the quite plausibly the best ending and when I turned off the first creation it hurt.

1. Quite Plausibly The Best Ending - Create a destruction machine and demolish all the stink bugs, turning off the first insect you created at the end.

2. Success Tinged with Ignorance - Create a destruction machine and demolish all the stink bugs, sleeping without even looking at your first insect at the end.

3. Success with a Moral Burden - Create a destruction machine and demolish all the stink bugs, looking at your first insect, but sleeping without turning it off.

4. Stink Bug Protector - Choose to not demolish the stink bugs with your machine and let them live at your house.

5. A Kind Person - Choose not to demolish the stink bugs with your machine, but still try to find a way to get them out of your house.

6. Lonely and Regretful - Fail to exterminate the stink bugs because your insect is either not powerful enough or can't attract them.

7. Lonely and Self-Destructive - Fail to exterminate the stink bugs even though your insect was powerful enough.

8. A Rich Space Future - Have one of your future descendants become rich selling the remains of the stink bug you squashed at the start when the species are already extinct.

12. A Delirious Samurai Death - Getting aimlessly lost in your house is so unacceptable you find a sword and commit seppuku.

I got "Lonely and Self-Destructive" by failing to exterminate the stink bugs even though my insect was powerful.

Welp, I have a new irrational fear now. At least I know how to defeat them.

Yay!! I got "quite plausibly the best ending" :P

Ehehe, I got Lonely and Regretful

"Insects also have a rudimentary sense of ego.."
Thank you for this kind of learning :)

(It also reinforces the first ending I had and some ethical thoughts I got: STOP KILLING BUGS, FIGHT FOR THEIR LIVES)

This was great! It made me learn bug science in perhaps the most enjoyable way yet.

This is a good game.  Currently trying to get all of the endings. I've got five. Will update on the situation!

I love learning about bugs so this is really interesting! I haven't finished it yet though. Thank you for making it :)

Reply
I have no idea3 years ago (1 edit)

I keep ending up in the kitchen AAAA!

I love it! So many endings and choices and you learn about insects too - this is absolutely BRILLIANT!

Why didn't I come up with this?

HOw did u make dis game.

yay, I got "Quite Plausibly The Best Ending" C:

Tbh. same but it took so much freaking time!

I didn't power it off.

Reply
angela he5 years ago

Kill it with fire

You have to look in the fridge, and continuously look in the illuminated fridge until the "experiments" show up, then examine them, then you need to exit the fridge, go back in, and examine the experiments again, and then you need to go online and search everything you can, but do not, and I mean DO NOT click on the "your metaphorical furs bristle" option. THAT IS BAD. After that, you need to go back into the fridge and click on the "create prototype" button. Choose Asian wasp for body and the chewing mandibles, then go to underground lab, choose neem oil pistol, cilantro bait, and then when you need to help it, choose apples as bait, and then you just need to click through and Ta-da! Problem solved. You're Welcome.

I love this game!!

Your word choice is so welcoming, so lovely, so familiar, it really increases my enjoyment of this game ten-fold!

I have only one "bug" report! The social justice ending-- when I try to go back after clicking the definition of bug research, it won't let me return! It prevents me from seeing my end game report!

All in all, still love it!! And I've never stepped on a stink bug and hope it never happens!

Reply
angela he5 years ago(+1)

lolol. Thank you!! 'bug' report haha. Hmm I'll try to look into that but I'm not sure where I put the orginal game file lol >.< Glad you love it!

I got an account to comment how amazing this is. I will definitely be getting all of the endings in my spare time. Keep up the awesome work!

Reply
angela he6 years ago

Thanks, haha. I'm so glad you have a high opinion of it! 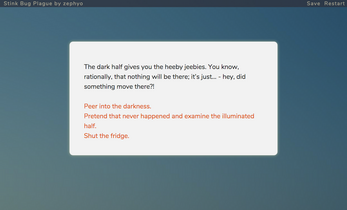 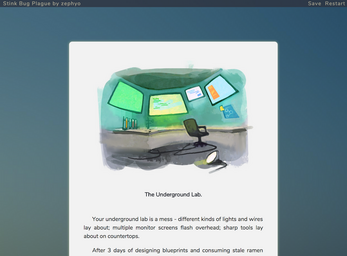 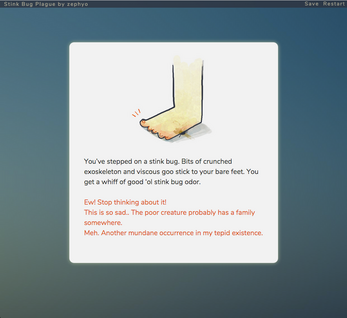