A downloadable game for Windows, macOS, and Linux

A classic love story: Meet, marry, grow old.
But when your loved one hurts you, what do you do?
Is it better to love and be hurt, than never love at all?

If you support me with $5, you can get 4 soundtracks, 22 wallpapers, and a thank-you drawing! As always, enjoy~

In order to download this game you must purchase it at or above the minimum price of $2.99 USD. You will get access to the following files:

what is it with angela in the egg blankets?

"Alright May, this is my third time, and I've done everything super safe so far, so you two can finally grow old together."

This was my experience. Don't know about everyone else.

this game made me cry like a baby, i love it so much and i got so attached to the characters so fast cause it reminded me of me and my fiance. i will definitely play this over and over again and when i need a good cry. thank you for making this game om

this was the second game I played after Missed Messages.

i really hope angela continue creating and making me cry hours with her emotional and beautiful  games :)

if we purchased this here is there any way to get the Google play version? Mobile is just more convenient but I'll play on PC if I gotta

Very cute game, I love the art!! And its a good short length.

Wow, there was just so much to love about this. The art has the perfect palette and every conversation flowed so smoothly. Thanks for making this and putting it out into the world!

The art is very soft and delicate. This is a thoughtful project. Thank you for sharing your work!

amazing,,, the best game ive ever played in a while.

This game is beautiful. The art and music are so well designed. The characters are well designed and really human feeling.

I almost cried when she died of a brain tumor, and they said that they lived together for many years, but they weren't able to establish their buisness. Very heart wrenching and meaningful game. The description made me think it was about rape or domestic abuse, but luckily it wasn't, and much more wholesome. Hats off to you Ms. He, you made an amazing, heartwarming game.

I just played this game for a while. It bringed tears into my eyes. I wish I could make an piece of art as meaningful as this one.

This game is really powerful. I really hope you keep creating beautiful games like these two. Such artistry and passion deserves to be shared.

Oh no my heart... Your games never fail to make me feel things, and I'm always amazed at the dialogue changes and how well-written all the paths are.

It's beautiful, I don't think I can recommend it enough

this is such a beautiful game  honestly. I  could really relate to August about her feelings about being alone. one of my first thoughts was I should just make so they never meet but I  think the better answer is to choose love even though it can hurt you.

why do you make such beautiful games.

Thank you Angela. I love this game. Made me cry a few times. Reminds me so much of myself and my girlfriend. I'd love to know if officially either/both of the characters are transgender. I'm curious as they have the trans flag on their bedroom wall and in my own head-canon they're both trans (but that's because in my own relationship we both are). We even have a cat!

SUCH A GORGEOUS GAME . as another comment mentioned, every scene replay plays a bit differently from the last, since your character is aware it is a replay. no two replays seem to be the same. I love the little details. wonderful writing and an incredible concept. PLEASE get this game, I promise you'll enjoy it.

Absolutely meets the expectations set by every other Angela He game. Every single one of these games has hit me right in the gay and it hurts every time. This one isn't what I expected based on the description, and I don't think I was emotionally prepared for what followed, but it's kind of in line with most of Angela's other games, with themes of death and loss and unending love. A little suspension of disbelief is needed, but only on the fact that they stayed in the same house their entire lives without changing the furniture, and the topical nature of including the virus/quarantine was a little jarring and I'm not usually a fan of games that are doing that in this way (it's just a little too current to be using as plot drama, I think, especially with no form of content warning for its inclusion while people are actively facing that loss and fear right now), but neither in any way decreases or negates the quality of the game. Music is beautiful, art is beautiful, story is gut-wrenching. Would recommend.

Also just a specific compliment: The menu screen being a part of the actual game is really amazing, the note that is added to the book after completing the story in full made my heart ache.

the only reason for me to get a job

Once I get some money I'm gonna come back and buy this <3 bookmarking !

made me cry. So good art and sound. Playing through the same section multiple times doesnt make it any less meaningfull, and there is more to rewinding than just replaying the same section. builds so much attatchment to the characters in such a short span of time

Hey i played this game for my channel, honestly its so sad

I'm so glad I picked this out of the Racial Justice and Equality bundle, this was really my first visual novel, and it was a great, straightforward story. Also Mao is adorable :D

Amazing experience. The love story is told beautifully, and the art is just lovely. I played it a couple of times just to see all of the endings, but here's the first gameplay, if you're not afraid of spoilers :

This is the most beautiful story I have had the pleasure to experience. Thank you! The music, the art, the story, its all amazing. I cried my eyes out.

Holy shit dude. You made me cry my eyes out so bad. Thank you but screw you at the same time

One thing that bothers me way more than it should: scrollin in the about section with the mousewheel is painfully slow.

I picked this game out because I thought it'd be a nice lesbian vn that would have light angst but eventually come back to a happy ending. I was wrong. I was so wrong. The art and music is so nice, and the dialogue made me relate myself and my partner to the characters even after a few minutes of playing. Unfortunately.

I wish there was a trigger warning for the covid-esque virus that kills her the first time. I was honestly unprepared for it when it happened, which was my fault in a way since there were hints of it before. That whole section is just a heavy part to get through, one that ended with me frustratingly screaming and also way more anxious than before. Which may or may not have been the intentions, but I just wished the warning was there.

By the end of the game I was crying, like actually crying, which is something I can't say I've done recently over a game. I mean, it hurt. All those times of losing her piled up and it felt so bad. Which is to say besides the lack of a warning, this is a pretty good game. I can't say I've enjoyed it completely (the first part really hits too close to reality w/o a warning for me to  be enjoying that section) but I will say watching the characters grow closer and stuff...it was nice.

it looks amazing and all, but death, cancer, and the virus are triggering topics...could you please tag such things" 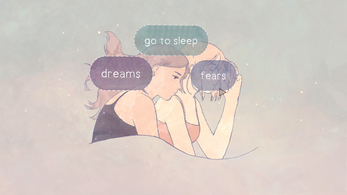 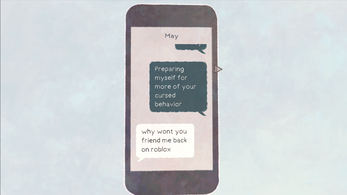 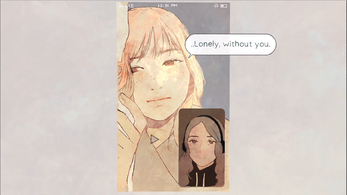 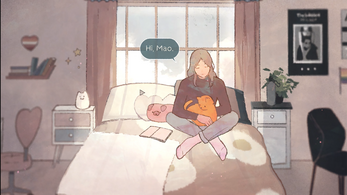 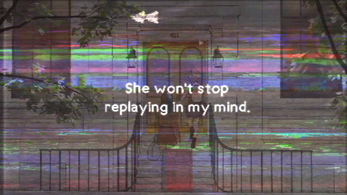